"With their unique combination of flavonoids and sulfur-containing nutrients, allium vegetables—such as garlic—belong in your diet on a regular basis. There's research evidence for including at least one serving of an allium vegetable—such as garlic—in your meal plan every day. If you're choosing garlic as your allium family vegetable, try to include at least 1/2 clove in your individual food portion. If you're preparing a recipe, we recommend at least 1-2 cloves.

Garlic is a wonderful seasoning to add aroma, taste, and added nutrition to your dishes. We often recommend using raw chopped or pressed garlic in many of our dishes to take advantage of the benefits derived from garlic. However, if you cannot tolerate raw garlic, you can add chopped garlic to foods while they are cooking. It is best to add it towards the end of the cooking process to retain the maximum amount of flavor and nutrition."

There many studies that confirm that garlic in several forms can reduce cholesterol. One reference is: Silagy CS, Neil HAW, 1994, The Journal of the Royal College of Physicians, Vol 28 No 1:39-45

2.  Garlic is an Healthy Aphrodisiac!

Tibetan monks were forbidden from entering the monasteries if they had eaten garlic.
It stirs up passions due to it’s ability to increase the circulation.

3. Garlic is an Anti-oxidant:

Researchers have widely believed that the organic compound, allicin, which gives garlic its aroma and flavour, acts as the world’s most powerful antioxidant. But until now it hasn’t been clear how allicin works, or how it stacks up compared to more common antioxidants such as Vitamin E and coenzyme…Research Sheds Light on Health Benefits of Garlic

Traditional Chinese medicine have used garlic for more than 3,000 years.  Current research is trying to determine the role it could play in treating many health problems such as heart disease and stroke to possibly helping to prevent cancer and increasing your immune system.

The allicin in garlic is also a powerful anti-biolic , which fights infection and bacteria. British researchers gave 146 people either a placebo or a garlic extract for 12 weeks; the garlic takers were two-thirds less likely to catch a cold. Other studies suggest that garlic lovers who chow more than six cloves a week have a 30% lower rate of colorectal cancer and a 50% lower rate of stomach cancer.Garlic helps to open clogged sinuses.

We ate lots of garlic in my home…my father would grow it and it went in everything. He would make garlic sandwiches which we all loved to eat. Toast with butter and chopped garlic and a sprinkle of salt mmmm it was yummy. There were 3 girls in our family and my father used to love to tell us that the garlic would grow hair on our chests!  Diana Herrington 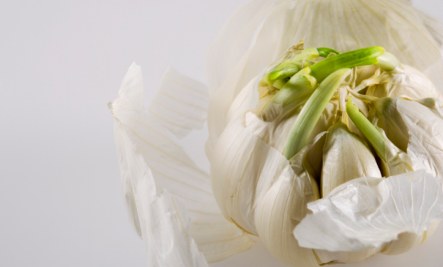 To get most health benefits from Garlic, let it sit for a minimum of 5 minutes, after cutting and before eating or cooking.  Waiting 5 – 10 minutes allows the health-promoting allicin to form.  If you do not let it sit, allicin is never formed, so it is worth the wait. What is Allicin?

I was having dinner with some friends one evening. My friend, Catherine had made a stir fry with lots of garlic in it; she told me that she could only eat organic garlic as when she ate non-organic garlic she would have extreme digestive problems.

The zucchini for some is just an excuse for all the garlic but in any case, it’s a heavenly combination.

Lentil Stew This savory soup has all the benefits of the mighty powerfood lentils plus much more.

Chinese Vegetables The Real Food For Life version of a classic dish.

Vegetable Stew Quick and easy like the Simple Garlic Zuchinni but with added onions, carrots and

Onion Gravy Everyone needs a great tasting healthy gravy like this.